Almost a month later: Some stats!!

The Great Voyage just released on Steam, but it has soon been almost a month out on itch.io and the traffic is slowing down. Time to bring out the charts!

Itch has a nifty feature that shows where people who visited your game page found it. Here’s the breakdown. (Sadly no such thing for downloads, unless people paid.)

As you can see over 50% of our traffic came from Reddit, where a thread on r/visualnovels reached thousands of people in span of couple days. I think my post was good and humble enough that the audience forgave my self-promotion. As a niche product, it was expected that r/visualnovels would reach the audience we were looking for. Targeted marketing is powerful and even scary!

Depending of the time of the day and hashtags, Tweets can snowball into a big wave of exposure. Most of the traffic on the first day came from twitter as #gamedev, #indiedev, #pixelart, #visualnovel and #indiegame showed the game to some new people. I only had about 20 followers at the time, so the tweet made a lot batter than expected.

Lemmasoft or the official forum for Ren'py games is one of the only websites still bringing in traffic. Most of the purchases also came from there.

Visual Novel Data Base is the only one of these I didn’t market at. At least 3 entries have been made about TVG in VNDB. I don’t know who made them, but I’m super grateful for the views! <3

Curiously, itch.io or the platform itself provided barely 2% of the overall visits to the page. That was my fault. I published the game page before the game was ready, however itch.io doesn’t show your game in the search results, if there’s nothing to download. After the game was published, itch treated it as published on the date I put out the game page. This means TGV was never shown on any “fresh” section or anything like that, explaining the low visits from itch.io. 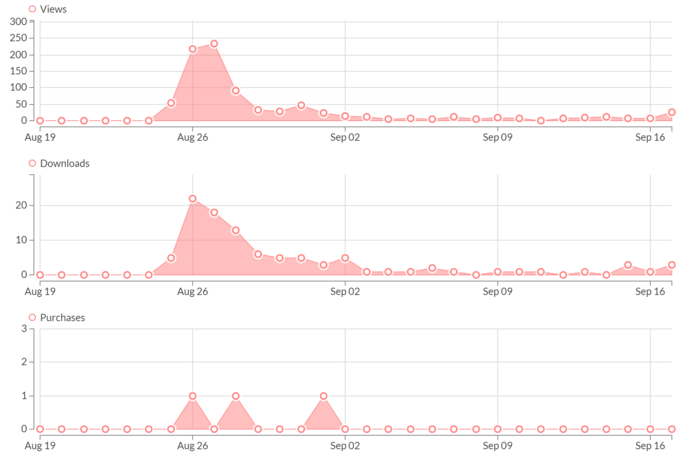 Stats on the views, downloads and purchases from itch.io.

Aaaaand now. How much money did we make?

We made a WHOPPING 16$ off of this game! (taxes, money transfer costs and platform fees not subtracted yet)

This is from 3 generous people who opted to pay money for our game. 2 of those paid the recommended 2$ and one paid MASSIVE 12$ for our game! (Thank you to you three!)

No one donated through the channel I set up inside the game itself, which i find weird because you would think people would want to pay after they are convinced the work was a good investment of their time and not before.
I will consider not putting donation pages inside the game next time, since they seem useless anyway.

Overall I’m quite happy how much attention my first release got. We got some friendly criticism and we made some people happy, and that’s what matters the most :)

That’s about all I have to say this time. I’m doing a similar thing when the steam release has been out for 1 month. Bye for now!

I am terrible at mixing colors. To create some kind of harmony in my work I usually choose a limited palette, from which I pick all the colors from. This time, to mask my incompetence as an artistic choice, I resolved to do all the... Continue →